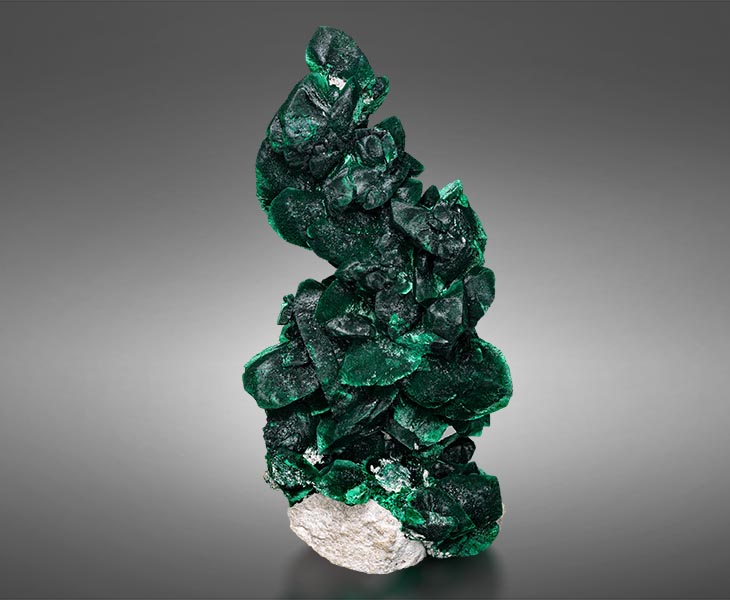 The Milpillas Mine is part of the Milpillas manto and porphyry copper deposit, the largest porphyry copper district in North America. The area has produced over 3.5 million tons of copper ore. Although rich in ore, it was only discovered recently due to the lack of surface expression. Of all the millions of tons of rock and ore mined at the location, only a tiny fraction of that volume developed in the form of small mineralized pockets, some of which contained extraordinary, collector-quality mineral. Each pocket differed greatly in its output; pockets have included azurite, malachite, malachite pseudomorphs, brochantite, cuprite, and many other interesting mineral species.

This is a stunning example of malachite that has formed after azurite. Malachite typically does not form with much definition, almost never forming in crystals on its own. It will occasionally take on a defined shape when blue azurite first forms and then transforms into malachite due to a change in geologic conditions in a process called ‘dissolution.’ Even then, comparatively few examples reach the degree of expression and the complex composition of this example. This piece boasts excellent crystal form, mimicking the first-generation of tabular azurite crystals, but the malachite has imparted upon it a sumptuous, green coloration, and a velvet-like texture. The crystals are stacked upon each other in an almost organic, undulating, S-shaped curve. Paired with its color, this sculptural specimen has a fluid, floral-quality. It is also incredibly lustrous for the species, and each crystal’s sharp form is accentuated by its sheen. The climbing structure is then anchored by a white barite matrix (host-rock) that provides a stark contrast to the velvety blades. With its exceptional crystallization, sculpturesque form, and uncanny, organic appearance, it is a natural work of art.