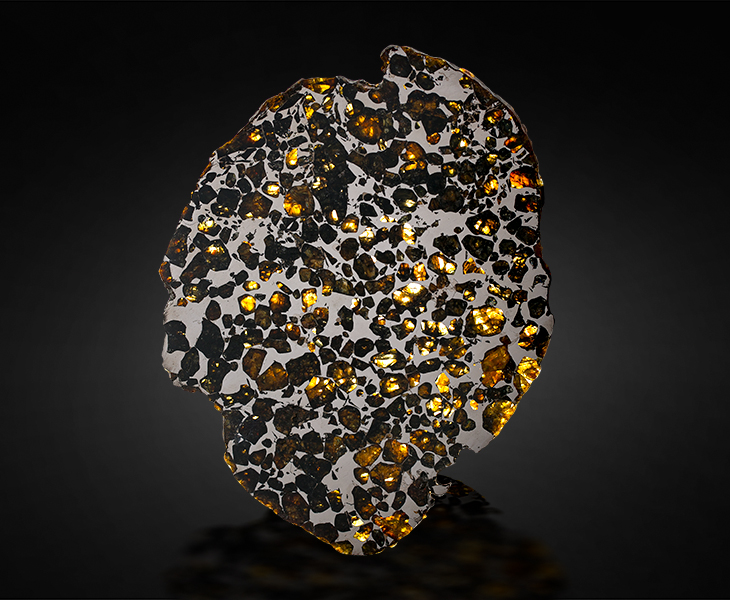 Meteorites are pieces of debris from outer space that fall through the atmosphere and land on the surface of a planet or moon. Most of what falls to Earth are stony meteorites that consist primarily of silicate minerals. Because of their high silica-content, stony meteorites resemble rocks readily found on the surface of the earth. Less common are metallic, iron-nickel-based meteorites, and rarer still are pallasites. In order to be classified as a pallasite, a meteorite must contain peridot-quality olivine within its iron-nickel structure. Although some pallasite falls produced tons of material, it is important to understand there is often a large disparity in quality among the pieces found. Most specimens are in the form of small nodules that pepper the fall zone. Among both the large and small specimens, there may be a significant amount of erosion and decay. When erosion of the olivine occurs, it produces what is commonly referred to as a “pallasite skeleton,” a hollow matrix (host rock), devoid of crystals. Olivine crystals can even be knocked out of the outer edges by the sheer impact of landing. By the time a pallasite enters the skeletal stage, it is typical for it to also undergo a further degree of erosion and/or oxidation, rendering the specimen to just a shadow of what it was at the time of impact. To this day it is still a mystery how pallasite meteorites were formed. Some scientists believe they formed due to the collisions of different asteroids while floating though space. Regardless of their origin, the combination of the beautifully transparent olivine crystals suspended within their metal matrices has captivated scientists and collectors alike.

This specimen is a slice of the cross-section of a pallasite. The circumference of this piece still has its original edges intact. This is distinctive since most pallasites are cut into slices and then cut into smaller pieces in an effort for dealers to sell the pieces easily, selling smaller sections to a broader client base. Those pieces have 90-degree corners and lose the character and beauty of the original form. Entire slices of any meteorite are rare, especially in pallasite varieties. Having the slice intact allows one to imagine what the meteorite in its entirety and also gives this example a beautiful dichotomy between the coarse, burnt edges and the sheen and brilliance of the polished metal face, and vitreous olivine crystals. This example was recovered from the Magadan District of Russia in the summer of 1967 and is an exceptional example of its kind.