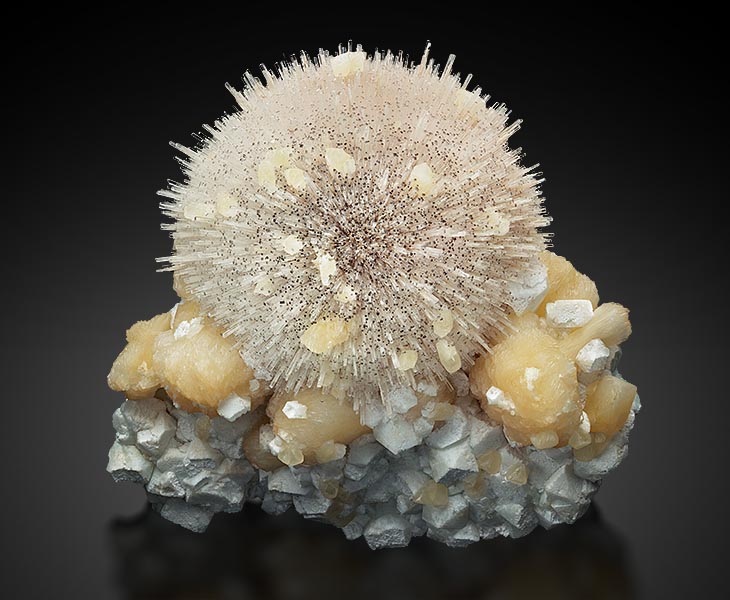 Mesolite is a plentiful variety of zeolite that forms in transparent, colorless to white, acicular (needlelike) crystals. Each individual crystal tip has a vitreous, pyramidal termination, creating a reflective window that both reflects light and allows one to peer into the crystal itself. Often, hundreds of these needlelike crystals will grow outwards from a central point, forming a radiating spray so dense, they sometimes create a domed semi-sphere. These structures are remarkably beautiful but extremely delicate. Mining, handling and transport often all take their toll. Even when crystals initially form in dense semi-spheres, it is not uncommon for them to already be broken, even before extraction, due to geologic events. This makes fully intact examples extremely difficult to acquire. In addition to all that, mesolites are prone to detaching from their matrices (host rock), adding to the difficulty in keeping them undamaged. More often than not, these stunning specimens are reduced to broken tufts.

This attractive example is not only dense with crystals and undamaged, but it also has a full, domed shape that collectors seek from the species. Its made up of a multitude of dove-white crystals with sparkling terminations, but notably, its scintillating effect is also paired with an optical illusion that makes each crystal appear to be terminated by black color—it’s an intriguing visual effect that can only be seen from certain angles when moving over the sphere. With its rounded silhouette, lustrous sheen, and radiating crystals, this mesolite has the same kind of beauty that draws us to an exploding firework or a dandelion’s head. It is ideally centered by a complementary matrix of pastel-yellow stilbite crystals. Small stilbite crystals have also formed intermittently among the crystals as if suspended in an orbit around the sphere. This is a breathtaking example that is both ethereal yet impactful.