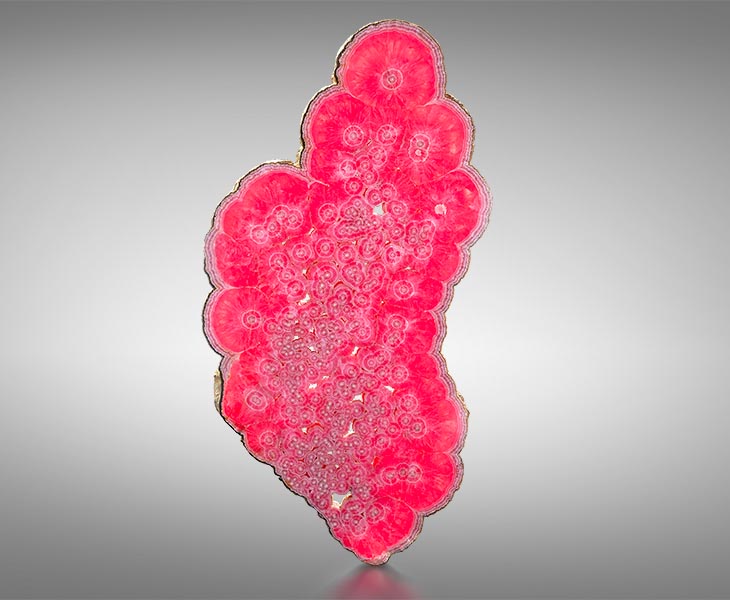 Rhodochrosite is a manganese carbonate that forms in the veins of low temperature ore deposits. Its manganese content gives this mineral a light pink to deep-red hue that is highly coveted by collectors. It may crystalize in any one of several crystal habits from rhombohedral, scalenohedral, botryoidal, bladed, or stalactitic. Rhodochrosite stalactites are found exclusively in Argentina from the Mina Capillitas mineral deposit. The area has been mined for copper, lead, zinc, silver, and gold ore but is most notably a producer of rhodochrosite. It was even utilized by the pre-Incan empire of Tuhuantinsuyo, and later by the Incans. When the Incan empire collapsed, the mineral-laden pits were abandoned and eventually forgotten until the mid-1800s when geologists rediscovered the mines. Although reports of rhodochrosite spread, it wasn’t until the 1930s that a formal excavation took place. In the 1940s, the Argentine military took hold of Capillitas copper reserves for use in their war efforts. In 1947, regular mining by private shareholders (in conjunction with the government) for rhodochrosite began and continue to this day.

Capillitas rhodochrosite is pink and ranges from light, blush pink to bright fuchsia. It typically also characteristic banding that is caused by rhythmic precipitation. The fine, milky bands and veins are intermittent layers of manganocalcite (or rarely, chalcedony). This specimen is an exceptional example that is composed of dozens of smaller stalactites that have intergrown into a larger piece. Like a tree, each ring and ray is an expression of growth and time, all in deep pink rhodochrosite with feathers of milky manganocalcite. Notably, this is an impressively large example that came from the very ceiling of the cave. Nearly all stalactites tend to thin and taper towards the bottom, making each successive slice smaller and less detailed. This piece has incredible size and detail. Its attractive, radial forms and patterning have an almost abstract, painterly aesthetic. The circumference of the slice is untouched, giving us a glimpse of the earthy texture that once concealed the vibrant rhodochrosite interior. With its combination of attractive aesthetics, rarity, and size, it is an exemplary example its kind.