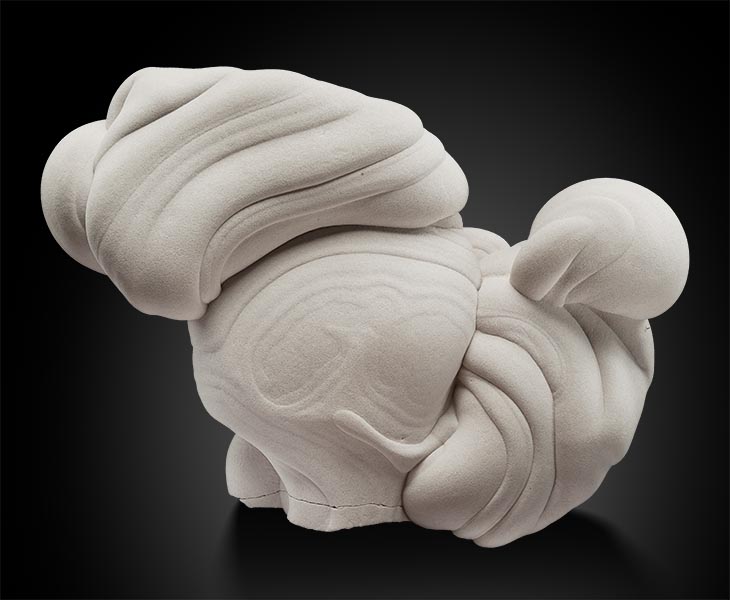 Although technically a “sand concretion,” gogottes (a.k.a. “Fountainebleau sands”) are of a special subgroup of concretion that is only found within the Parisian basin. Their primary difference is that they have layered, three-dimensional forms that differ wildly from the simplistic spherical, discoid, and/or flattened sandstone concretions from other localities. While all concretions are appreciated for their geological significance, gogottes are unique in that they have gained special recognition from the art world. They were loved by the Surrealists, as well as aristocrats such as Louis XIV. Gogottes have been used to decorate the gardens at the Palace of Versailles and the Three Fountains. Although many minerals can be sculptural and beautiful, gogottes were among the first to be recognized by art purveyors such as Christie’s and Sotheby’s for their expressive, artistic aesthetics.

Many theories exist as to how the Parisian gogottes formed, though it still remains a bit of a mystery. It’s most likely that lithification (formation into a rock) occurred at groundwater level after the last ice age. It is believed that permafrost interacted with melting, circulating groundwater, and quartz-based sand, combining to create a concrete-like solution that slowly solidified as it moved underground. The result was highly sculptural, natural mineral structures that captured the movement of fluid that took place.

This is an excellent example that often gets mistaken for something made by man because of its smooth contours and artistic form. It has an even, grey-white tone. Most notable, of course, is its many curves and folds that give it dimension and add a sense of movement. The combination of its coloring and form makes it attractive and interpretive. Some even say this example shares a particular likeness to a dog, others have nicknamed it, “Eichhornchen” or “squirrel.” Interpretive and attractive, it is an excellent example of why gogottes have been a celebrated form of natural art for centuries.