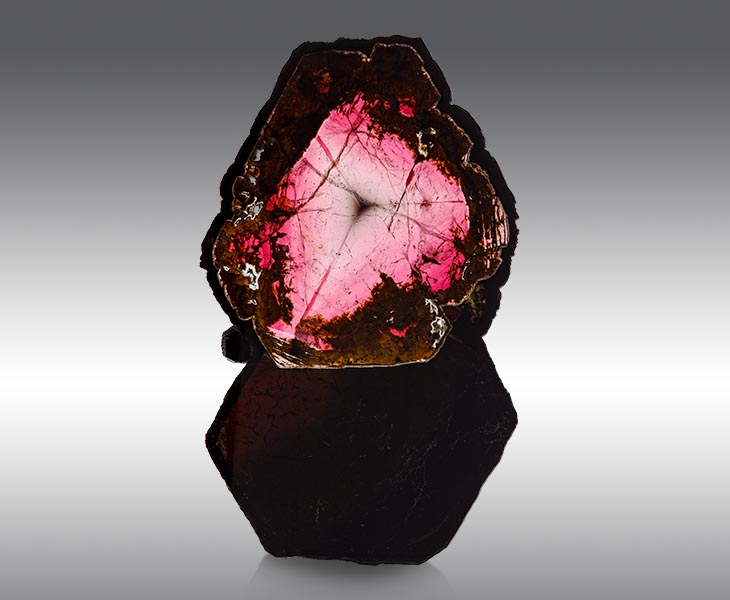 This stunning specimen is a slice of liddicoatite, a very rare variation of tourmaline. Liddicoatite is famous the world over for its unbelievably colorful interior, which is caused by its unique growth pattern. During its formation, its layers are deposited one on top of the next. Often, the layers differ in color or tone and subsequent layers encapsulate the ones that preceded them. The resulting crystals are typically incredibly dark and conceal the colorful layers within. Since tourmaline forms in a trigonal system, slicing open a well-formed liddicoatite crystal at its center sometimes reveals a heart of triangular shapes and brilliant tones. Every slice is the same, however, even when they come from the same crystal. Each cross section has the potential to exhibit different colors and patterning. The most desirable examples are multicolored, containing two or more distinct colors, with sharp internal color zoning.

This massive specimen is a cross-section of two, incredibly large, intergrown liddicoatite crystals. Alone, just one of these crystals would be considered sizeable, yet this impressive example exhibits two distinct, hexagonal crystals. They have been mounted upright, giving the piece a likeness to the number eight. The bottom crystal is so intensely colored, it appears almost black. The upper crystal has a deep, moss-green outer zone that frames a core with three, distinct zones in a gradient of pink hues. It has a small, sharp deep-green triangle at its center. Three thin pink lines radiate outwards from each of the triangle’s points, accentuating its geometry. Translucent and colorful, the slice illuminates like a stained-glass window when lit and it illustrates its unique growth pattern beautifully. Its is an undeniable showpiece for any space.