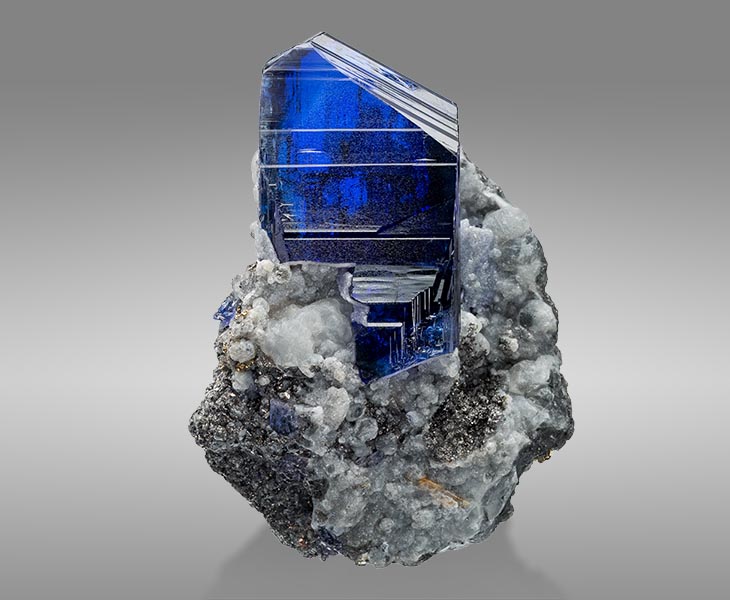 Tanzanite is a form of zoisite that was first discovered in Tanzania in 1967. Although a more recent discovery, it quickly gained popularity as a colorful and attractive gemstone and is now considered one of the most important colored stones in the gem and jewelry industry. Although not all gem material has resonated with the same importance in both the mineral collecting and jewelry worlds, tanzanite has taken both by storm, establishing itself as fascinating and collectible in both its cut and natural forms. The golden era of tanzanite production was between 2007-2010 and it was during this time that most specimens and gem rough came to market. Since this influx however, findings have been sporadic, and the last few years have not produced any significant finds for the mines. In addition to sparse discoveries, miners of tanzanite have stated that their already limited resources will most likely be depleted within the next thirty year, noting that mining difficulties may cease mining even sooner.

Most tanzanite crystals have muddled coloring with a mix of browns, reds, blues, and purple. The rarest and most sought-after of all tanzanite crystals are the ones that exhibit an evenly saturated, intense, blue or purple coloration. Many, of the tanzanite crystals used in the jewelry industry were once of the muddled variety but have been heat-treated to adjust color consistency and saturation. Heating tanzanite re-aligns its molecular structure and homogenizes them to a lovely, even, purple-blue tone. While the heat-treated gems are considered beautiful and are wholly acceptable after enhancement, ultimately the naturally derived specimens are still considered the pinnacle of desirability by jewelers and mineral collectors alike. The preference for untreated specimens is not just a matter of preference. Heating a tanzanite not only alters its overall color, but it also affects its natural ability to express trichroism. Trichroism is the appearance of different colors, dependent on which axis a crystal is viewed. Natural tanzanite specimens exhibit different colors at its X, C, and Y axes. In the best examples, the X and Y axes show purple or blue, and the C axis exhibits red. Although cutting tanzanite rough into gemstones will mean the reshaping of its natural form and a setting may make it difficult to see its trichroism, discerning a natural tanzanite from an enhanced example is simple. One must only look for the red component (or lack thereof), it will be completely absent from heated pieces. These heated pieces are no longer considered trichroic, but dichroic, a travesty to collectors of high-caliber minerals who treasure natural tanzanite and its incredible characteristics.

This specimen is an excellent example of natural tanzanite with outstanding, saturated color. It has smooth, glassy faces, and impeccable luster. Despite its aesthetics, this piece has not been cut or heat-treated, allowing it to exhibit its trichroism beautifully. All axes display vivid colors which are further enhanced by transparency and luster. While most tanzanites have no matrix (host rock), this one remarkably has a perfectly balanced matrix, setting it apart from other examples. With its rarity, pristine form, matrix, and spectacular color, this specimen is an outstanding example of its kind.