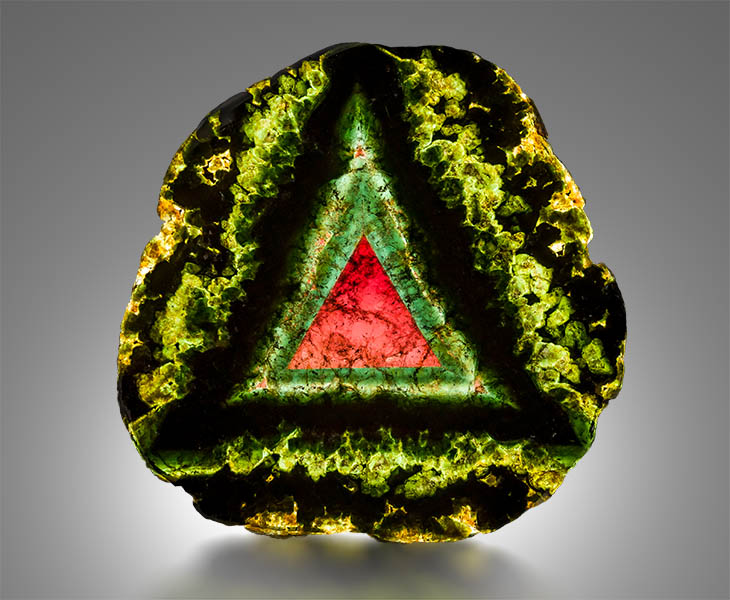 Tourmaline is beloved for its propensity for color and lovely gem-like appearance. Vibrant and varied, tourmaline has captivated mankind with its beauty and pyroelectric capabilities since ancient times. When civilizations beheld these breathtaking natural gems, they were convinced that tourmaline was of a magical origin and endowed with supernatural powers. Early Egyptians, for example, believed that tourmaline traveled up from the heart of the earth through a rainbow and that it had absorbed its many colors. Ancient Indians believed it was imbued with the power to provide insight into the future, allowing one to benefit from future good and avoid trouble. And Native Americans used tourmaline as funerary gifts, believing them to be powerful talismans of protection.

This stunning slice is a very rare variety of tourmaline known as liddicoatite. Liddicoatite is famous the world over for its unbelievably colorful interior, caused by its unique growth pattern. During its formation, each layer is deposited one on top of the next, each subsequent layer encapsulating the central zones within. Not only do these layers have the capacity for vibrant hues, but because tourmaline forms in a trigonal system, slicing open a well-formed liddicoatite crystal at its center sometimes reveals a heart of triangular shapes and brilliant tones which can vary significantly crystal to crystal. Because of the way in which the liddicoatite crystals form, every slice from the crystal’s cross section is unique in both the colors that it displays, as well as the pattern that it takes on. The most desirable examples are multicolored, containing two or more distinct colors, with sharp internal color zoning.

This is an exemplary slice with sharp color bands with black, green, and red coloring. At its center is a vivid, crimson triangle that immediately draws the eye. Framing it are subsequent layers of emerald, chartreuse, and black that contrast one another with arresting precision, creating an intricate pattern that is not always seen in all liddicoatite examples. The natural translucency of the crystal allows this slice to come alive when lit from behind, like Mother Nature’s version of a stained-glass window. Although the majority of liddicoatite crystals reach a maximum of two to three inches in diameter, this is one that has formed in a relatively larger size, allowing for immediate impact. This was recovered from the Alakamisy Itenina Commune in 2017. The entirety of that find comprised of a single liddicoatite crystal that then became five, kaleidoscopic slices, of which this is one. Vivid and distinctive, this example was only one of two that contained a captivating, red center. Quite notably, Alakamisy Itenina is only known for one other significant find, a pocket of liddicoatite that was recovered and worked in 1991-1992. Although more specimens were found at that time, by the end of 1992, the area was thought to be depleted and no more material became available to the market. It remained unworked for approximately twenty years until 2017 when scouts revisited the locale and came upon this singular crystal. With its awesome aesthetics, rarity, and size, it is an extraordinary and impressive example of its kind.