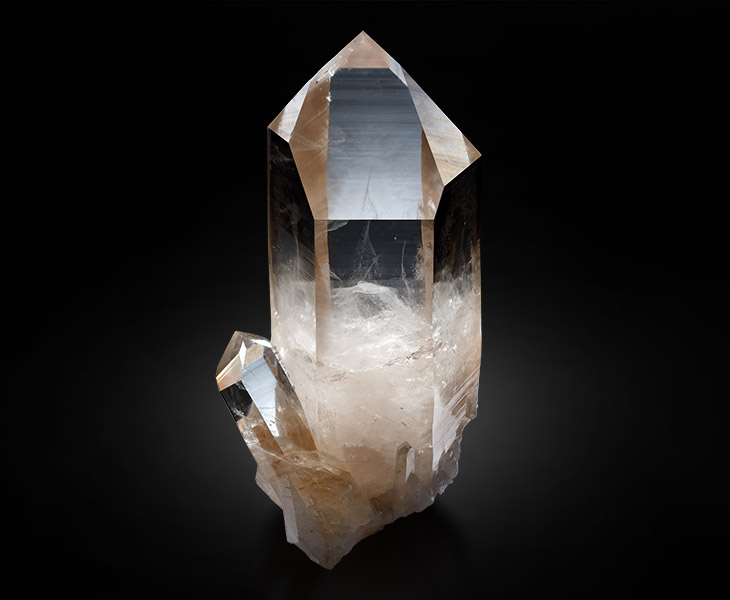 Quartz is the most prolific and well-known species in the mineral kingdom. It can be found in nearly every corner of the earth and is utilized in a multitude of objects that we encounter in our daily lives. Despite its abundance, there are just a handful of locations that produce quartz notable distinction, differentiating themselves from the masses. Connoisseurs of fine quartz tend to agree that the three best localities for distinctive specimens are Columbia, Brazil, and Arkansas (U.S.A). Despite the distance between them, they have one commonality, they are deposits that consist of hydrothermal quartz veins that rose to temperatures far hotter than the hydrothermal quartz veins of other localities. The quartz that formed in the intensely hot deposits are notably clearer and the best examples from these localities have a superb luster and sharp form. They are instantly recognizable because they not only surpass examples from other localities around the world but their natural characteristics rival the work of any master gem-cutter.

The McEarl Mine of Arkansas is known as the pinnacle of quality for all U.S. quartz specimens. The mine produced three major pockets of material, including one that produced what many consider to be some of the best quartz worldwide. Although a prismatic habit is typical of quartz, the best McEarl specimens tend to be exceptionally symmetrical and quite consistent in width throughout their bodies until the point of termination (which can often be piercingly sharp). Of all the localities in the world, it would be easy to say that a great McEarl specimen is often what people idealize and picture quartz to be, though only the best examples truly ever reach such perfection. When these perfectly-formed examples are also blessed with clarity, they can be absolutely mesmerizing. This is one such example, astonishing and rare in its symmetry, condition, size, and clarity. The specimen is composed of a sizeable primary crystal and a secondary, sidecar crystal that mirrors its form, a perfect accent. Both have smooth faces with exceptional luster and sharp, defined corners. They are striking in their clarity and are nearly entirely optically clear. At the bottom of the large crystal are wisp-like inclusions that anchor the piece visually, appearing like winding veils of mist dissipating into a vast, clear sky. With its stark elegance, it proves that even the most prolific species can produce outliers with unanticipated beauty.