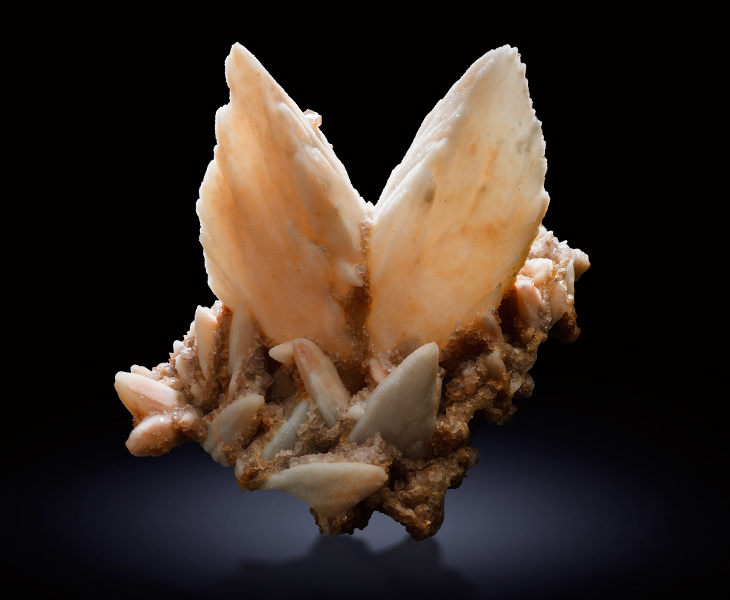 This fascinating specimen is an example of an epimorph, owing its formation to multi-generational growth and environmental intervention. Epimorphs occur when one species of mineral forms but is later entirely coated by a second generation comprised of a different mineral species. Naturally occurring, geological forces dissolve the first-generation of mineralization and leave a hollow cast consisting of just the second-generation mineral. Often, this leads to unexpected forms and new subsets within a species that are considered unique and unusual. In this way, epimorphs add diversity to the mineral kingdom and are a source of intrigue for geologists and mineral collectors alike. In this particular case, calcite crystals developed and were then covered entirely by a later stage of quartz growth. Environmental forces within the pocket caused the calcite underneath to dissolve. What is left is this hollow cast of shimmering quartz in a form typical of calcite.

This specimen is one of just a few quartz-calcite epimorphs recovered from the Huanggang Mine of China. What makes this particular example especially remarkable is that the first-generation growth phase was composed of outstandingly dramatic, exceptionally formed, calcite twins, giving it a very symmetrical and attractive, v-shaped silhouette. Adding to its beauty is that its second generation of quartz growth coated the surfaces of these calcite crystals in a fine quartz druze. Eventually, the calcite was entirely dissolved, leaving behind a shimmering, hollow cast. The subtle edges of calcite in this piece created a base for a relief-like surface on the specimen’s face that resembles feathers, and its overall form gives it the appearance of wings. Nicknamed, “Angel Wings,” it is compellingly beautiful, geologically interesting, and considered to be the finest, as well as the largest example of its find.