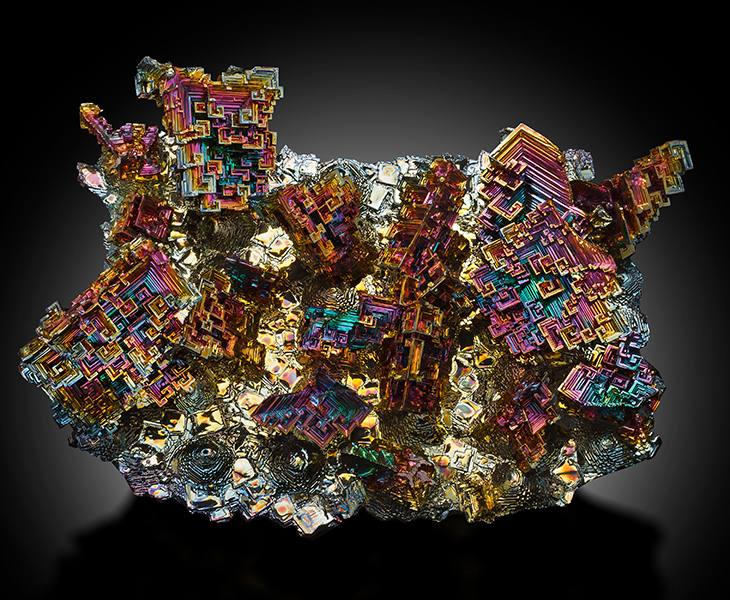 Although we typically do not carry anything but entirely naturally-formed specimens, this bismuth, with its unbelievable size and superb crystallization compelled us to make it our single exception. Many are familiar with bismuth (Bi) as a chemical element from the periodic table, and some may have even seen small examples, around an inch or two, in science museum giftshops or in curiosity stores. It has a reputation for being a “lab-created crystal,” but that description would be reductive to the fascinating, natural processes that actually take place. In nature, bismuth is most often found in silvery, somewhat amorphous amalgamations. They are a far cry from the uncanny crystals on the market with their complex, highly geometric formations and rainbow of colors. In order to create these spellbinding crystals, the bismuth is taken to a lab where it is placed in a crucible and heated to 520 °F (271 °C), at which point it will melt into a silvery liquid. Impurities are then removed, leaving behind pure bismuth. As the bismuth cools, its atoms and molecules stack and join to create one of the most efficient formations that a crystal can take on- the hopper growth pattern. Hoppered crystals are easily identifiable for their precise, angular, concave forms. Often called, “stair-step” or “stepped” crystals, the hopper formation has been likened to the stupefying staircase paintings of M.C. Escher. When the hardened bismuth is removed from the remaining liquid, it will oxidize immediately, changing its silvery tone to a rainbow iridescence.

This is a massive example boasting an unprecedented number of large, tower-like structures across an unusual, plate-like matrix. Even the smallest of these “staircase towers” would be considered a sizeable crystallization of bismuth, yet they are a fraction of the size and complexity of the medium and large-sized structures. Well-dispersed across their matrix, it’s easy to get lost in every individual tower, each an architectural marvel. Even the matrix plate has amazing definition. Were that not enough, the specimen exhibits a full spectrum of colors and gleams with a golden luster. Intricate, pristine, and perplexing, it inspires everyone who sees it and is often likened to a futuristic metropolis on an alien planet.