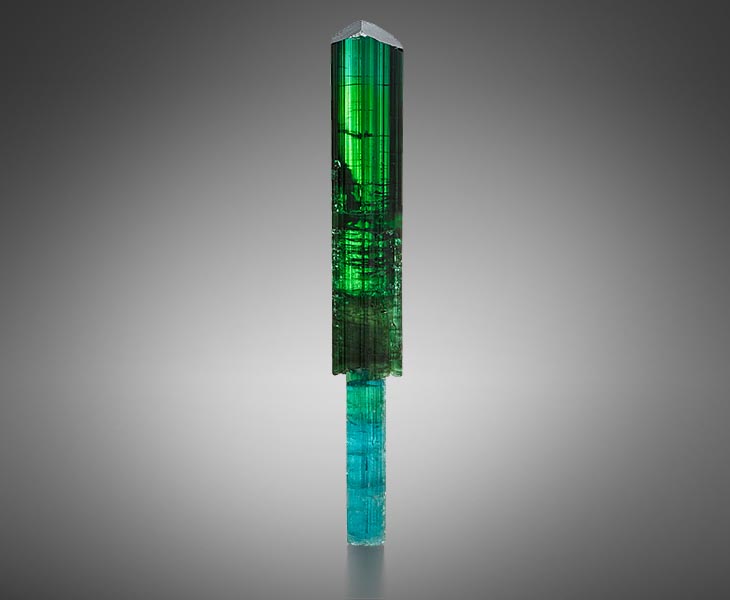 Virgem da Lapa is among a cluster of five very small, but important mines in the steep and often impassable hills located between the Jequitinhonha and Araçuaí rivers of Minas Gerais, Brazil. The mines were first discovered between 1939-1940 and shortly thereafter used for the production of industrial beryl. The most prolific era for the area proved to be 1960-1973, reserves dwindled to infrequent pockets of gem-grade material thereafter. Among the most famous discoveries of the area are the exceptional pockets of the late 1970s which produced fine, green and multicolored tourmaline, colorless beryl, and some exceptional, large, blue topaz crystals. The Manoel Mutuca Mine, specifically, is acclaimed for its gem-caliber tourmaline in the elbaite variety, and most famously, indicolite (the blue variety of tourmaline). The tourmaline from “Mutuca,” as it is often called for convenience, was an instant sensation for its vitreous crystals in sumptuous hues of blue and dark-green. Although most of the material ended up in the jewelry market, sold off to be cut into gemstones, the fine specimens that remain are natural jewels with a level of luster and form that rivals their polished counterparts.

This is a stunning, gem-quality example with two generations of tourmaline growth. The base of the crystal has as a slender, prismatic form in a gorgeous, dark cerulean-blue color, it accounts for a little over a third of the specimen. The top portion has a more robust form in a rich, emerald-green tone. The specimen’s shape suggests that at one point, the green layer covered the blue core entirely. With a prismatic body and a ‘chisel-tip’ termination, this specimen has a wonderful form that is atypical of most tourmaline specimens. Lustrous, translucent, defined, and saturated with rich color, this specimen is a perfect example of why Mutuca specimens have retained their worldwide acclaim.