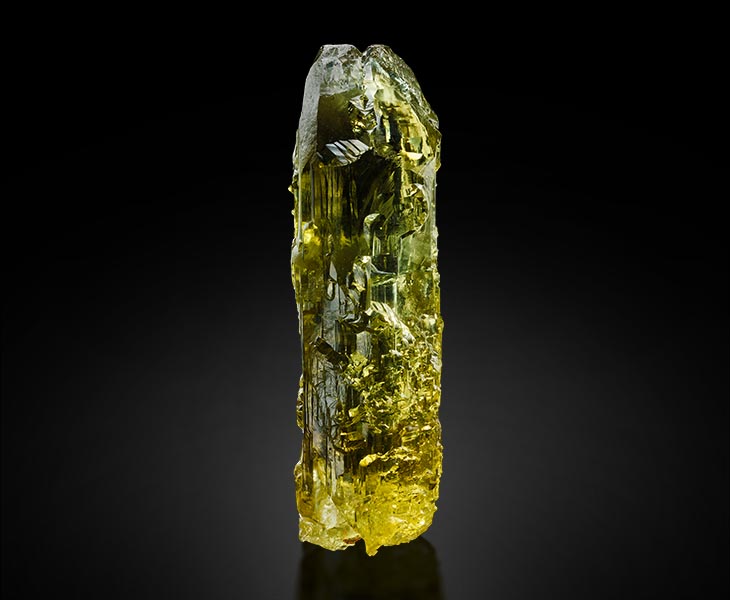 Heliodor is the yellow to green-yellow variant of beryl, colored by Iron (Fe3+) ions. As a beryl, it takes on the typical, hexagonal crystal habit that is often highly identifiable in other beryl specimens such as emeralds, aquamarines, morganites, etc. Many heliodors however, do not exhibit the smooth faces and crisp edges of their counterparts due to the geological phenomenon known as, “dissolution.” Dissolution is a process whereby an original state of a liquid, solid or gas (in this case a solid) is dissolved or decomposed into an alternative phase, typically liquid. Often this process paves the way for the elements involved to reconfigure themselves through precipitation, ultimately transforming into an alternative state and sometimes allowing for recrystallization. This process typically gives heliodors an etched appearance, transforming the faces of geometric crystals into more amorphous, textured crystals that have recrystallized. The same process is typically what detaches these crystals from their matrix. The surface of this example has the characteristic etched appearance that is indicative of dissolution.

The Volodarsk-Volynskii area (in the Zhitomir oblast) of the Ukraine is the premier locality for all heliodors of fine quality. Only the Medina area of Minas Gerais, Brazil has produced comparable heliodors and of them, only a handful of considerable crystal quality that would compare with the examples from Volodarsk-Volynskii. The Ukrainian pegmatites are of considerable age, 1.77 billion years old, and the pegmatitic material within them was first discovered in 1867. Mining began in 1931 with heavy exploitation during the Cold War in order to supply the Soviet Army with piezoelectric quartz. It was a heavily protected resource that produced nearly 10 tons of quartz. Although a significant producer of minerals with nearly 100 different species present, the collective haul of beryl for the locality was a mere 2%. Gem-grade beryl was among the later finds of Volodarsk-Volynskii being discovered in the mid-1980s. Thanks to mineral shows, first in Europe, then in the United States, collectors became aware of these stunning, nearly flawless, translucent beryl specimens. Mining in Volodarsk-Volynskii ceased in 1996 without plans for reopening.

This is an excellent, green-yellow heliodor of fine size, shape and quality. It exhibits the wonderful translucence, golden color, and high luster for which Volodarsk-Volynskii heliodors are known. As a cabinet specimen, it reflects the slightest hints of light and has an internal brilliance not seen in many minerals.