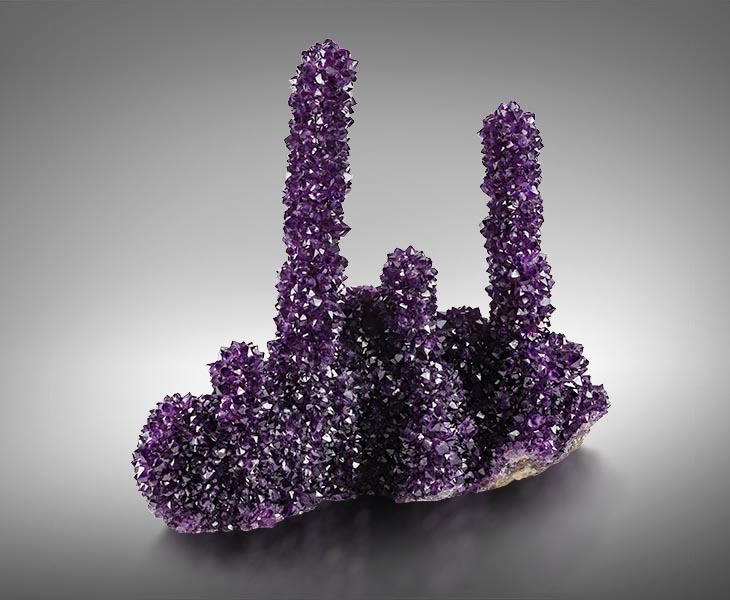 Amethyst is among the most prolific minerals on earth. Despite its plenitude, there are only a handful of localities known for fine-caliber specimens, each locale with its own unique, signature aesthetics. From slender, lilac, elongated crystals from Vera Cruz, MX to large, equant, royal purple crystals from Jackson’s Crossroads, GA, USA, the diversity among a single species is astounding. Artigas, Uruguay is known for amethyst with an incredibly deep, rich color that is unlike any other from around the world. While the majority of what’s found is a light or medium purple, the best and most desirable examples feature incredibly rich, deep-purple tones that are distinctive. The darkest are so richly toned, they’ve been likened to the color of grape jelly. These dark crystals tend to be smaller in size but can be very well-formed and tightly packed together into dense, clusters that are enhanced by glossy luster. With their deep purple tone, small, shape, and luster, fine examples are instantly recognizable by sight alone. Overall specimens may range significantly in size and can reach extraordinary proportions, the majority of which are concave geodes that are lined with crystals. Examples with secondary mineral species, like contrasting colorless calcite, or those with particularly interpretive forms, rise to the top as glittering, natural sculptures.

This incredible specimen is composed of a cluster of stalactites, which are now displayed upside down. Its size is impressive, as are its number of stalactites, and the sheer number of crystals that make up its whole. The individual crystals are well-defined with distinctly prismatic forms, glassy faces, and sharp terminations. They shimmer with a dark brilliance thanks to their vivid, dark purple tone and high-shine luster. Notably, this specimen is entirely crystallized on all sides, its 360° viewing capability makes it a natural showpiece. It’s an impactful example that captures the quintessential look of its famous locale, as well as nature’s amazing ability to create dramatic works of natural art.