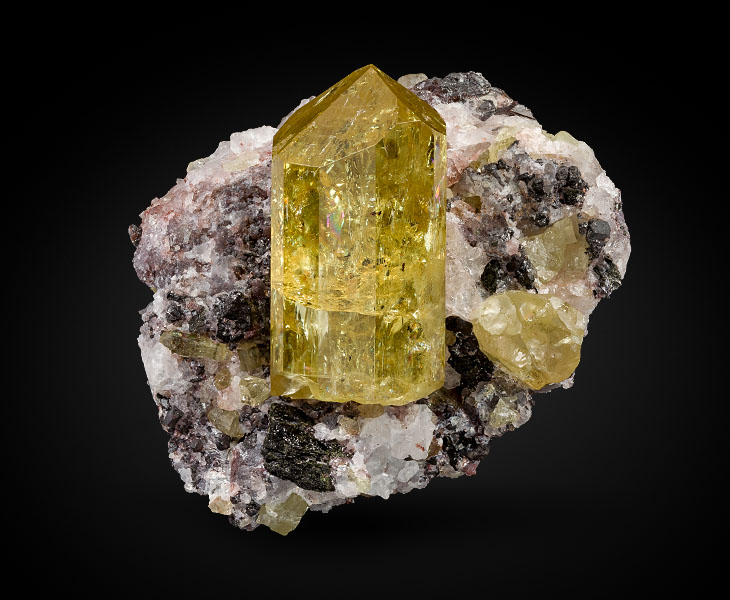 Apatite is a group of phosphate minerals that get their name from the Greek word “apatein,” which means “to deceive or mislead” because of their similarity to other minerals such as olivine, peridot, and beryl. Apatite specimens come in a variety of colors and can range in translucency, the best examples can be very gem-like in appearance. Some of the most famous yellow examples are from Cerro del Mercado, a mountain in Mexico known for its rich, iron ore reserves. A historic mining locality, it was first encountered by the Spaniards in the 1500s but was passed over in the pursuit of gold and silver. In the early 1800s, local farmers began utilizing its iron on a small scale. Although a British mining company then attempted an organized smelting operation, these efforts were unsubstantial. Subsequent refinements made the locality more productive, but the cost of transporting the ore to the nearest railroad station made any profits inconsequential. In 1893, the railroad was extended to Durango, finally making the mining profitable. The mine was closed intermittently in the mid-80s but was reopened in 1993. Until recently, apatite crystals were hand-picked out of the ore to decrease its phosphate content. The majority of them were damaged from rough handling but the small number of well-formed crystals that came out unscathed went on to become classics among collectors.

This example is characteristic of the best traits of the locale with its vivid, canary yellow coloration, prismatic form, and acute, pointed termination. Glossy luster accentuates its smooth faces and sharply formed edges. It is luminous when lit thanks to the crystal’s translucency and golden color. The crystal is perfectly balanced against a backdrop of white quartz and hematite which contrasts the bright, lustrous crystal. Looking at this example, it is no wonder why Cerro del Mercado and the surrounding Durango area became a favorite for the species.