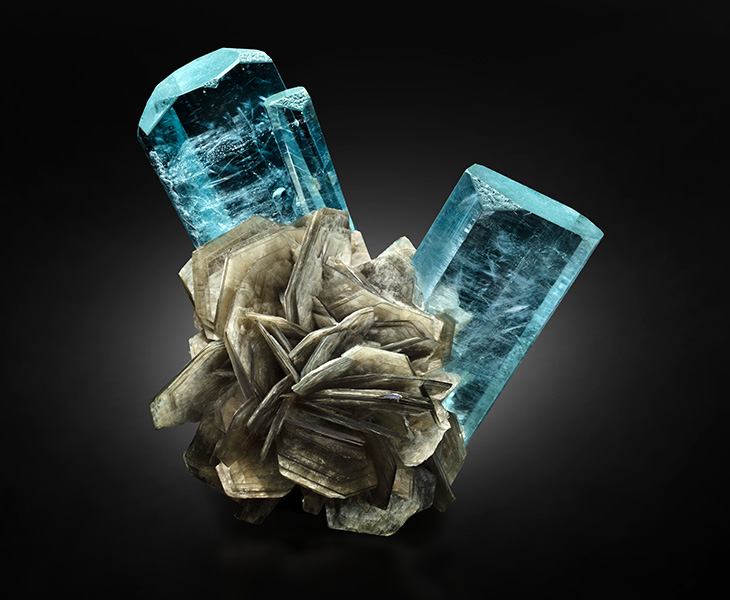 Aquamarine is a blue variety of beryl that has long been prized as a precious stone. It has been utilized in jewelry for thousands of years by numerous ancient civilizations including the Greeks, Romans, and Egyptians. It derives its name from the Roman term for “water of the sea” and was believed to be a treasure of the mermaids that would protect sailors during their journeys. Although there are numerous deposits worldwide, fine aquamarine specimens are primarily recovered from mines in Pakistan and Brazil. Although Brazil often produces the highest quality aquamarine crystals, specimens tend to be aesthetically limited due to the fact they are almost always single crystals that have detached from their matrices (host rock). Although Pakistani specimens are more likely to come with some degree of matrix, intact specimens are still tremendously difficult to recover because of the steep, alpine deposits from which the aquamarines are recovered. Those that are successfully retrieved must then also adhere to the standards of the species, including superlative luster, clarity, color, and form, among countless other criteria.

This is a breathtaking example composed of two robust aquamarine crystals (the largest measuring 6.5cm tall). They are joined by a matrix of sharp, silvery-toned muscovite blades. The aquamarine crystals have sharp hexagonal forms and are distinctly terminated with smooth faces and defined edges. Lustrous and translucent, each crystal has an attractive, gem-like appeal, furthered by ethereal, sky-blue coloring. The muscovite blades have a pearly luster and are large yet strikingly thin, giving them a delicate beauty that complements the gemmy crystals. The most compelling aspect of this specimen is its attractive composition. The crystals extend from their matrix at an approximate, 45-degree angle from one another, as though purposely positioned. The muscovite is not just a complement to the aquamarine but is also shapely and has formed in a delicate, domed rosette. This rounded shape acts as a base for the two, angled crystals, like an articulated joint. Dimensional, balanced, and with exceptional quality, this specimen has outstanding aesthetics, all at an impactful size that will be the focal point of any display. It was in the personal collection of fine mineral dealer, Daniel Trinchillo until he made it available to his Fine Minerals International and Mardani Fine Minerals clients.