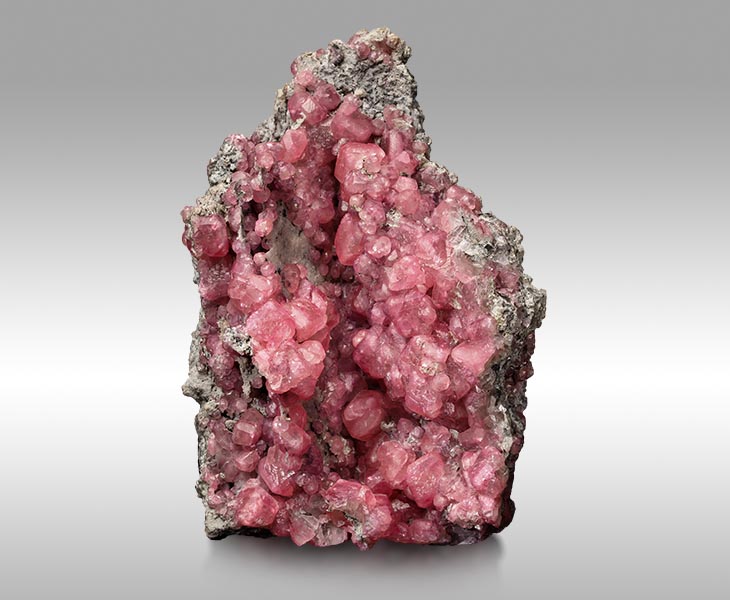 Smithsonite is a zinc carbonate (ZnCO3) that is typically found as a secondary mineral in the oxidation zone of zinc ore deposits. It may also occur as the product of the oxidation of sphalerite. It was first identified in 1802 by chemist and mineralogist, James Smithson. (Many know Smithson as the benefactor of the Smithsonian Institution in Washington D.C.) At the time of its discovery, there was no distinction between the minerals now known as smithsonite, hemimorphite, and hydrozincite. They were all previously categorized as calamine. Upon its recognition as an independent mineral, it was posthumously named after Smithson in 1832. Although it comes in an array of colors, the most desirable examples are well-saturated crystals of turquoise blue, canary yellow, and light rose. Many of the best examples have from from the famous Tsumeb Mine of Namibia, a now-closed, classic locality.

This is an impressive and sizeable example of the species. Most smithsonite tends to have a rough or amorphous crystallization. This example, however, has numerous, pronounced crystals with distinct, rhombohedral forms. The crystals are imbued with a beautiful, bubblegum-pink coloration and a lustrous sheen that gives them an almost pearlescent quality. Their contrasting, earth-toned matrix accentuates the color and luster of the smithsonite all the more. It also lends its undulating, concave form, giving the piece a sculpturesque look. With its size and aesthetics, it is an extraordinary example of the species and its most famous locality.