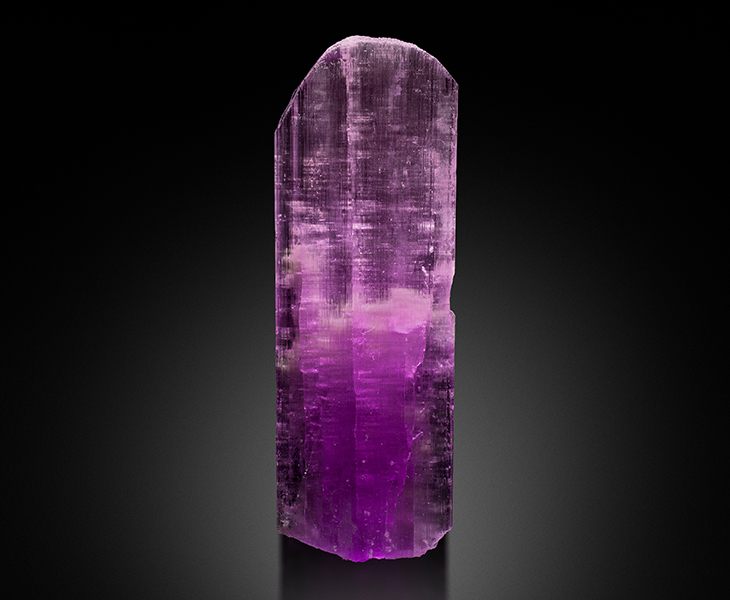 Spodumene occurs in lithium-rich granitic pegmatites and is typically used industrially as a lithium ore for ceramics, automotive and cellphone batteries, medicine and in flux agents. Basic spodumene is typically colorless to pale yellow, but two varieties of the species, hiddenite and kunzite are prized as gem material in the jewelry industry. Hiddenite ranges from a pale to emerald green coloration, attributed to trace amounts of chromium in its chemical composition; kunzite is a pink, to lavender version that is colored by the presence of manganese.

Kunzite was first discovered in 1902 and was named after famed mineralogist and then Tiffany & Co. Vice President, George Frederick Kunz. Of all the localities worldwide that produce kunzite, there are just a few that stand out for outstanding specimens of considerable note: Brazil, Madagascar and Afghanistan. Although all are known for exceptional specimens, they produce considerably different examples due to their unique geological environments.

This is a sizeable, plate-like kunzite that is approximately 41 cm tall, with a slim profile of 4 cm. Its overall window-like shape and fine translucency allow it to glow easily with just a small degree of light. It has one evenly saturated color of pastel pink-purple but exhibits two shades because the crystal retains a thin layer of its matrix on the back, lower half. The matrix gives the crystal a backing that does not let light pass through as easily as its top portion. It adds a slight level of opacity and therefore helps intensify the kunzite’s coloring and visual interest.