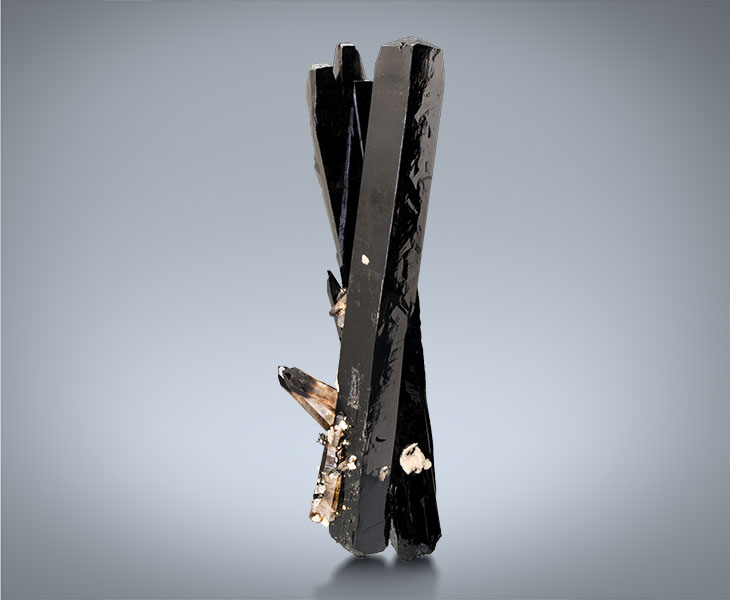 Aegirine is an inosilicate mineral of the clinopyroxene group. It’s known for expressing a dark-green to an intensely deep, green color that is so dark, it appears nearly black. It was first described circa 1784 but was not given its common name until 1834 when the mineralogist Hans Morten Thrane Esmark found what he believed was a new mineral on the shores of Norway. He named it after Ægir (Aegir), a Norse god accredited with being a personification of the sea. His was not the first name given to the species, however. It is sometimes still referred to as “acmite” from the Greek word for “point,” for its sometimes-pointed crystals.

The alkaline pegmatites of the Zomba-Malosa district of Malawi are famous for their unique geology and mineralogy. Malawian aegirine crystals represent some of the best in the world, but obtaining this incredible material comes with its challenges. Malawi is a land-locked country in south-eastern Africa, and Mount Malosa is a very remote and dangerously steep area. Furthermore, because there aren’t any major industrial mines in the region, miners use primitive equipment, and sometimes even their bare hands to dig out specimens. All the while, they also have to scale and balance themselves upon the steep cliffsides without modern climbing equipment such as ropes or pitons. It is astounding that given these precarious conditions, they are able to preserve beautiful, undamaged specimens such as this gorgeous example.

This aegirine is a great example the beautiful specimens that are recovered from the area. It has sizable, elongated prismatic crystals that are evenly formed and sharply defined. They have a stacked appearance, with one in front of the other, but cross each other ever so slightly to create an x-shaped silhouette. The crystals are so intensely dark and practically appear black in coloration. They also have smooth faces and an oil-slick luster that punctuates their form and color. Smaller, translucent smoky quartz crystals further accentuate the intensity of the aegirine crystals. Sleek and dramatic, it is a handsome example of the species and would make an excellent addition to any fine mineral collection.