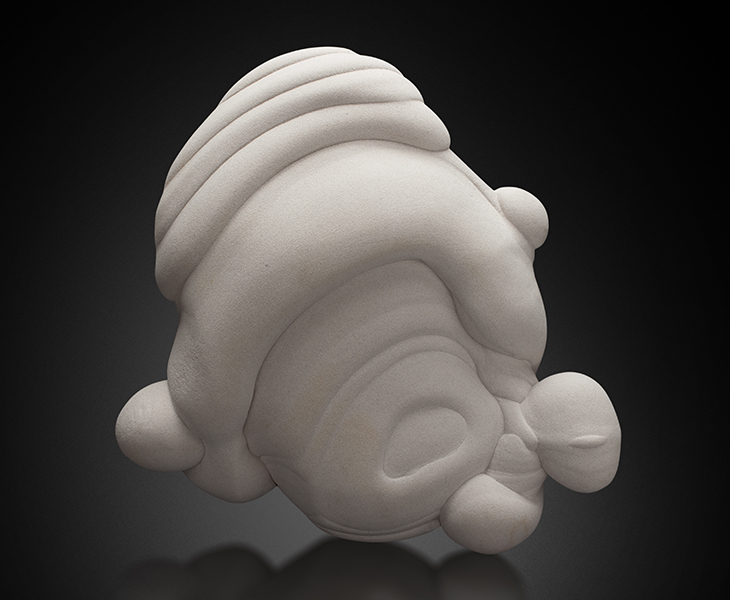 The gogottes of the Parisian basin are a distinct class of concretion that are unique in both locality and aesthetics. Though technically a “sand concretion,” gogottes are of a special group of concretions that are only found within the Parisian basin (sometimes referred to as the “Fountainebleau sands”). They also have layered, three-dimensional forms, as opposed to the spherical, discoid, and/or flattened sandstone concretions from other localities. While all concretions are appreciated for their geological significance, gogottes are unique in that they have gained recognition from art purveyors such as Christie’s and Sotheby’s because of their expressive, artistic aesthetics. Gogottes were loved by Surrealists and aristocrats, such as Louis XIV, and used to decorate the gardens at the Palace of Versailles and the Three Fountains. They are typically white to light gray, but can sometimes be red or brown due to iron oxide staining. Notably, this particular example boasts a uniform coloration throughout, which is extremely rare.

Many theories exist as to how the Parisian gogottes formed, though it still remains a bit of a mystery. It is most likely that lithification (formation into a rock) occurred at groundwater level after the last ice age, when the permafrost interacted with warmer, circulating groundwater. The change in temperature likely created an unstable environment for the quartz-based sand, which combined with siliceous water to create a concrete-like solution that slowly solidified as it moved underground. The result is a highly sculptural, natural mineral structure that captures the movement of fluid that took place. This is an excellent example that often gets mistaken for something made by man because of its smooth contours, artistic form, and the fact that there is remarkably no contact point. The vast majority of gogottes are actually massive, having conformed to the seams within the earth, and are often broken upon excavation or for the purpose of display. This example is fully terminated and at an excellent display size.