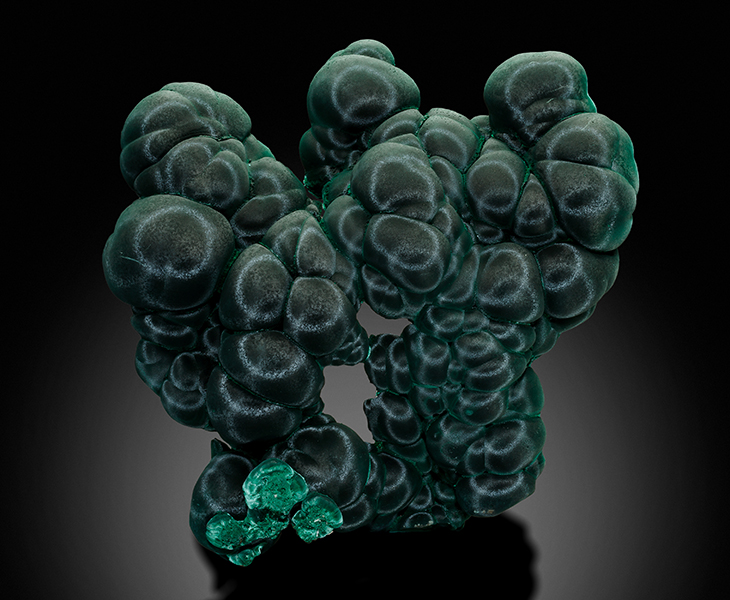 Named by the ancient Greeks for its resemblance to the mallow plant, malachite has been an object of longing and desire in the worlds of jewelry, art, and spirituality for over 3,000 years. It is a copper carbonate hydroxide in a range of rich green tones that has been found in mines all over the world. Malachite has been utilized by ancient Egyptians as a beautification pigment, in the Middle Ages as a form of protection from the “evil eye,” and as a symbol of wealth and grandeur by the Czars of Russia.

Typically, malachite is mined as blocks of mineralized layers and is used to carve everything from vases, to animal figurines, effigies, fine intarsia jewelry boxes, and jewelry itself. Among the most famous producers of malachite are the (now closed) Ural mountain mines of Russia. Czars of the 19th century paid fortunes to harvest the material and have it cut and carved to adorn floors, columns, and the walls of their opulent palaces. Malachite became synonymous with luxury and extravagance. Prime examples of its utilization for this purpose can be seen in the collection of lavish artifacts housed in the State Hermitage Museum of Saint Petersburg, Russia.

The primary source of malachite is the Democratic Republic of Congo. It produces a vast majority of the cutting rough and occasional fine specimens found on the market. The best examples have always managed to captivate with their unusual forms and rich, almost shamrock-green color. Recently, malachite formations from the Shilu Mine of China have become a sensation for their distinctive aesthetics. The best examples have artistic forms and exhibit a particularly deep, forest-green color, unusually smooth-looking texture, and a silky, lustrous sheen, all of which can be seen in this stunning example.

This intriguing specimen looks like it’s made up of velvet-covered spheres. This is because each sphere is composed of thousands of tiny malachite crystals that are tightly compacted in a botryoidal (grape-like) crystal habit (shape). Like the fibers of velvet, they are densely packed and create a textured surface that appears plush but is actually hard to the touch. Each tiny crystal has great luster, so when the specimen is lit, round reflections appear on the globular nodules. When the light moves, the circular reflections also move, creating an uncanny effect, like that of eyes following an object in their sight. It is a mesmerizing sight that is even more striking due to the undulating form of the overall composition. A small area of negative space serves the specimen by breaking up the cluster of spheres and giving it an almost weightless appearance. This specimen would be sure to inspire conversation and imagination in any room.