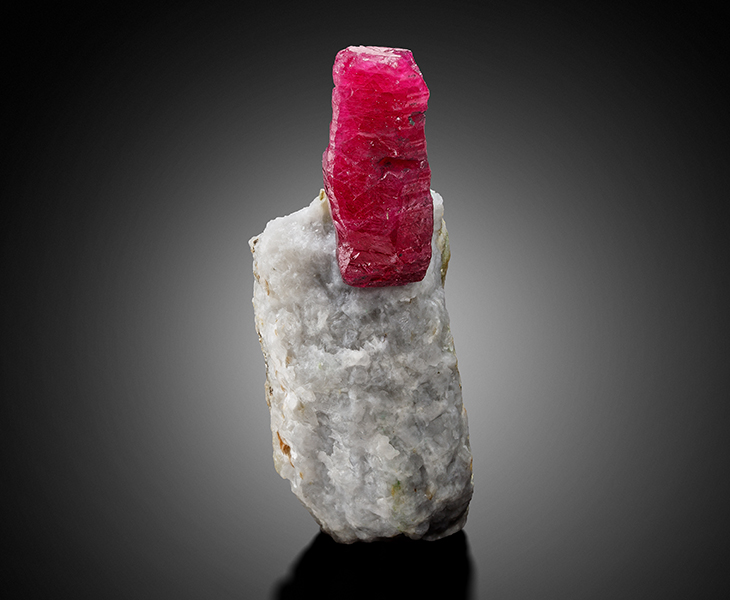 Rare and visually captivating, red crystals (of all kinds) were once believed to be of a single species, ruby. Prized, desired, and romanticized, rubies inspired a multitude of myths and legends around their beauty and mystery. It wasn’t until 1783 that scientific advancements allowed for the discernment between rubies (the red variety of corundum) and other red mineral species, such as spinel and rhodochrosite. This discovery meant that true rubies were even more scarce than previously believed, making up only a fraction of red stones. Today, rubies remain a coveted rarity and are among the “big three” favored by jewelers and collectors for their aesthetics and lore.

Although each red mineral species is celebrated in its own right, rubies are unique for their excellent resistance (9 on the Mohs scale) and distinctive, “pigeon’s blood” red tone. In fact, even against other colors of its species (corundum), they are considered special (all other colors are called sapphire). Despite their popularity, rubies have remained elusive. With so few fine-caliber rubies over a few carats in existence, the competition for crystals is high. To further complicate matters, corundum isn’t known for sharp crystallization. Better examples may be sufficient for gem rough but are typically unsuitable for fine mineral specimens.

This is an exemplary example that consists of a single, elongated, doubly-terminated ruby crystal with a defined hexagonal form. The crystal is approximately 3.7cm tall, an impressive size for its caliber and species. It exhibits a deep-magenta tone that is richer than could be captured in our photo. In-person, it is closer to the ideal for rubies, a “pigeon’s blood-red” coloring. Lustrous and vivid, it stands upright upon its natural pedestal, a matrix (host rock) of contrasting, white marble. The contrast between the two punctuates the ruby’s presence, making it stand out in any group. It is an aesthetic example of one of the most coveted gemstones in the world and would make an excellent addition to any fine mineral collection.