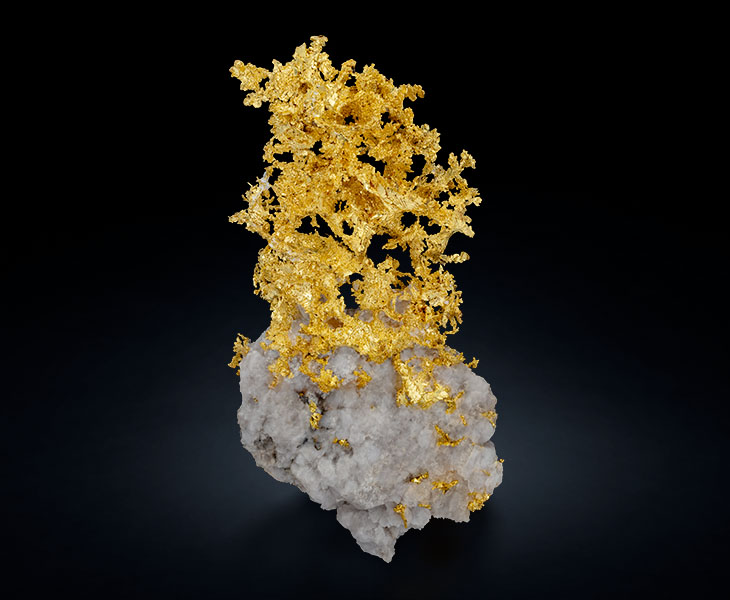 Mankind’s love for gold is incomparable, universal, and irrefutable. As one of the most widely accepted, inherently valuable resources on the planet, gold has ignited the desire of man for thousands of years, fueling wars and spawning nations. No other mineral resonates in the human psyche with as much intrinsic value or cultural importance. In its natural state, gold is most typically found in flakes or amorphous nuggets which must then be melted down to be given shape and definition. The natural crystallization of gold is an uncommon occurrence, it will only form in crystals within quartz veins that contain a significant amount of carbonate (conditions that are not reflective of most gold-bearing deposits). Often, the specimens found within those quartz veins are completely embedded and the quartz around it must be chemically dissolved to reveal the gold within, making each gold specimen a kind of a revelation.

There are just a handful of notable localities that produce crystalized gold, including Nevada, Russia, and Brazil, but no other source approaches the importance of the gold mines of California. Not only is California prolific, its specimens tend to form larger, more complex structures with better definition. California gold is also known to have an outstanding, bold, yellow color that is indicative of a higher gold content. While all gold is considered a commodity, crystallized gold is singular, beautiful, and rare, urging collectors to create entire suites of them. Adding to its collectability is its ability to differ greatly from specimen to specimen. It can take on a wide array of habits including, octahedral, cubic, dendritic, herringbone, wire, hoppered, skeletal, leaf or nearly any combination of those forms. Its incredible variety and incomparable desirability make it an essential species—one will not find a competitive, world-class collection without a prominent gold to anchor the presentation.

This is a spectacular gold specimen that must be seen in person to fully be appreciated. Radiant, enormous for its kind, and dense with intricate crystallization, it is immediately impactful with a presence that cannot be denied. It is something that could be thought of as, “not yet famous,” a piece so extraordinary, it is sure to garner attention from all who see it. Its obscurity is almost certainly due to the fact that the previous owner of this specimen was the mine’s former owner who kept it reserved in his private collection for over twenty-five years. While other famous gold specimens have made their rounds in the public eye (exhibited in museums, displayed at competitions, published in books and magazines) this example was stowed away as the prized trophy for the owner of the Eagle’s Nest mine (which is one of the most celebrated crystallized gold mines in the world). As one might imagine, his private collection had several extraordinary gold specimens, but this was, by far and large, the single most sizeable and deeply impressive of the entire group. Even larger than specimens such as The Bristlecone, a veritable behemoth in the world of fine crystallized specimens, it is astoundingly large. Beaming with a golden, yellow radiance, its brightness and size are suddenly arresting to all who see it. It then retains their gaze with its complexity. It is replete with sharp, spinel-twinned crystals that have formed together in a dense network. There are small areas of negative space throughout it that highlight the crystals’ sharp forms, as though this were Mother Nature’s very own rococo creation, a golden filigree. The gold is anchored by white, quartz matrix (host rock) that adds contrast of color and texture. Crystals of gold can also be seen emerging from it, lovely, sparkling accents against the starkness of white. Intricately defined, brilliant and lustrous, it bears every defining quality of an exceptional crystallized gold specimen, all at an astonishing size. This gold specimen would undoubtedly become the centerpiece of any collection with its magnificent visual awe.