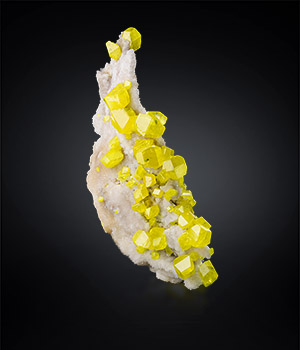 An extremely mineral-rich locality, Sicily, Italy was the world’s primary commercial source of sulfur-bearing compounds throughout the 19th century. Dozens of mines dotted the island, particularly in the provinces of Enna, Agrigento, Caltanissetta, and Siracusa. By the 1980s, the Sicily’s sulfur production dwindled significantly, generating a fraction of the ore it once produced. Inevitably, this caused the discovery of new, notable specimens to be a thing of the past, a travesty for collectors who found its Sicilian sulfur to be unequivocal. Blessed with brilliant, yellow color, the best examples also have sharp form, sleek luster, and many have even formed on contrasting matrices (host rock), adding to their impact and presentation. Even today, Sicilian sulfur specimens are still regarded as some of the absolute finest in the world and are further rarified by the closure of most of the region’s mines.

This is an incredibly artistic example with bright crystals, all in an unusual, sculpturesque composition. Its sulfur crystals are nicely-sized and vivid, have good form, translucency, and great luster. They are complemented by a white calcite matrix (host rock). Interestingly, in this example, the matrix is terminated on both the left and right sides. Most of the sulfur crystals are visible on one side, but because the piece is terminated on both sides, there is an interesting, dimensional effect that isn’t captured in the photo. With gemmy crystals fringed along the edge, it is incredibly sculpturesque and interpretive. Some have likened its overall shape to a crescent moon, others to a boat. This piece can be mounted to be vertical, slanted or horizontal depending on one’s preference.