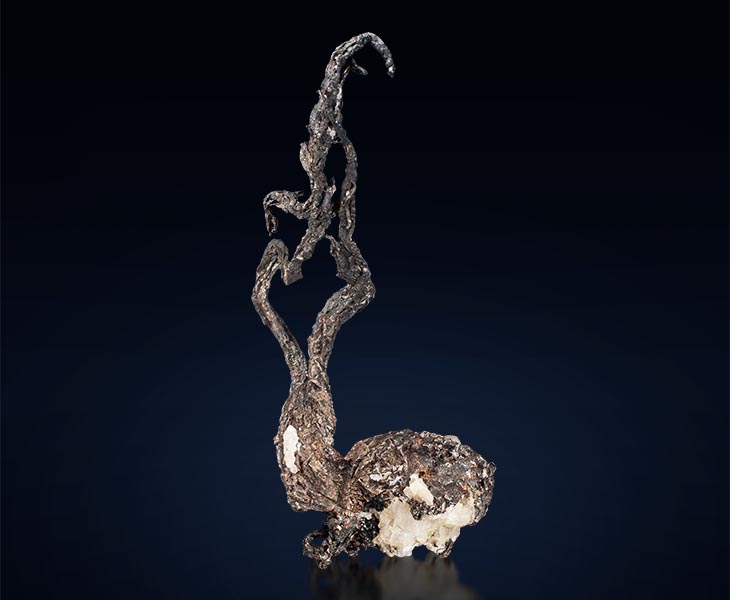 Native silver is among a handful of minerals that have been deemed inherently valuable by mankind since antiquity. It was (and still is) considered valuable, useful, and beautiful, playing an integral component in the development of economy and industry for every major producing locality. In fact, the practice of mineral collecting was first recorded in the late 1400s, and the earliest known mineral specimens ever collected are two examples of silver from Saxony, Germany. Today, silver specimens are considered “classics” in the mineral collecting community and have a devout, cult-like following, making them timeless collectibles.

Silver is especially collectible in its wire and crystal forms. While crystallized silver is rare and highly prized, very few examples exhibit the sharp, fine-caliber crystallization found in many other minerals. In fact, most crystallized silver specimens tend to have crude crystal habits with little definition. Generally speaking, wire silver specimens are the more desirable alternative for their dramatic and artistic formations. Each strand of silver has its own twists and turns, and with silver’s tendency to oxidize, it can form impressively aesthetic specimens.

This is an attractive example that starts with a thick trunk that reaches upwards and outwards, bifurcating into two major branches. They extend, with subtle bends and folds and then taper, making the specimen resemble a gnarled tree in winter. The silver is heavily textured and has a bark-like appearance that furthers this likeness. Richly patinaed, the silver is stark and striking with its dark oxidation and silvery highlights. Small white calcites create excellent contrast to the silver wires and add to the interpretive layer of this expressive piece.