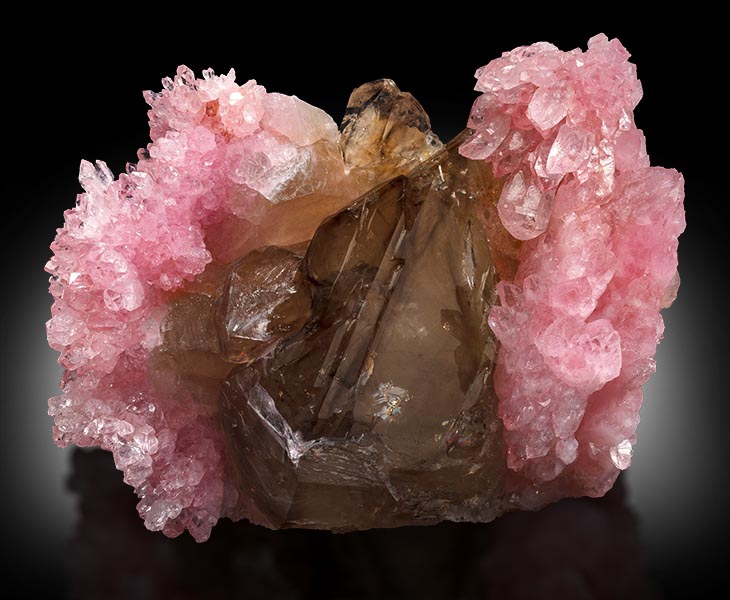 Rose quartz is well-known and well-loved by seasoned collectors and novices alike. Its light pink hue is exceptionally popular for its aesthetics, and many metaphysical practitioners believe it to be imbued with powers of love, harmony, and peace, making it extremely popular for carved objects and jewelry. Despite its popularity, few know that the pink variety of quartz is not exclusively ‘rose’ quartz. There are actually two different varieties of pink-colored quartz, ‘rose’ and ‘pink’, and though they may both exhibit a rosy hue, they are colored by different trace elements. Although this may seem confusing, pink quartz is also visually distinct in that it has the ability to form in prismatic crystals which are typically quite small, while rose quartz is typically found in massive, amorphous blocks that must be cut and polished to have definition. Side by side, there is no question between the varieties. Were this not enough, pink quartz is also usually more transparent and more naturally lustrous as well. The best pink quartz, with its translucence and defined form, is a rarity that garners its own distinction and appreciation among mineral collectors of fine-caliber.

This is a superlative example that has two large clusters of sharply-defined pink quartz that flank large, smoky quartz crystals. Lustrous, translucent, and dense, the crystals add great texture to the specimen overall and an unmistakable pink hue. Were they alone, either cluster would be considered sizeable, but together, they add balance to the large, lustrous smoky quartz. This is a singular example that showcases both mineral species in an attractive composition with symmetry and balance. It is an incredibly desirable and collectable specimen that would be sure to enhance the value of any fine mineral collection.