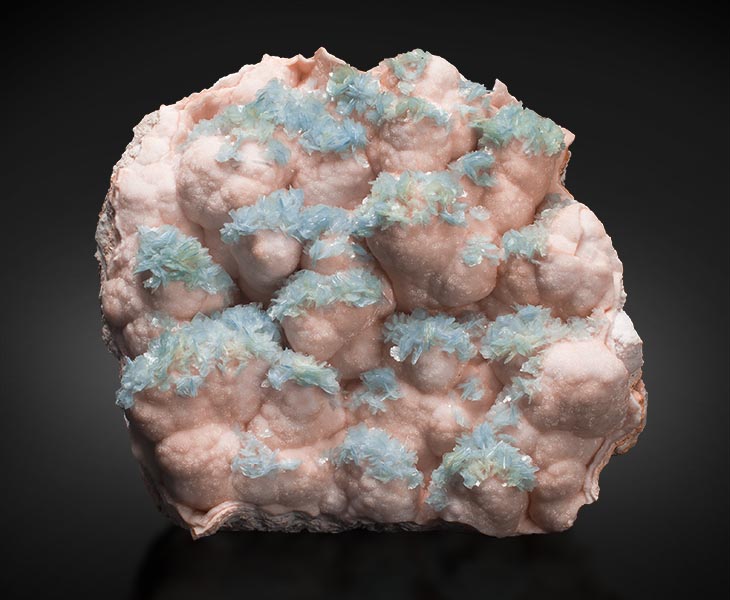 The town of Cavnic is a historic mining locality that was first documented in 1336. The Cavnic mine, specifically, began production in 1958 and is known for having large quantities of lead, zinc, manganese, as well as small quantities of gold, silver, antimony, and barium. Mineral specimens from Cavnic are considered, “classics” in the collecting community and are sought-after as such. In 2008, the mine closed, adding to the value and collectability of specimens from this locality. This is one such specimen, now considered an old Romanian classic. It was first brought to the mineral market in the mid-1980s. It features a rare combination of minerals, barite and dolomite, and was extracted from a very small pocket containing approximately twelve specimens. Since its discovery, no other mine has produced material of the same unusual combination. Despite dealer, Daniel Trinchillo’s three-decade long experience with the mineral market, he has encountered only two such minerals from this pocket in his career, both of which he promptly acquired upon sight in 2014. This specimen is one of the two purchased that day. Both were brought exclusively to the Mardani gallery and currently, this is the only one available. It has a matrix of shimmering, powder-pink dolomite mounds. In soft contrast to the dolomite are dense rosettes of translucent, sky-blue barite blades. They spray outwards and add dimension and texture to the specimen. Visually, this specimen has the benefits of translucence, color, a variety of textures, luster, and a combination of differing crystal habits. From the standpoint of mineralogical interest, it is an anomaly from a now closed, classic locality. The combination of its visual and geological traits makes it an irreplaceable mineral treasure of great beauty and importance.