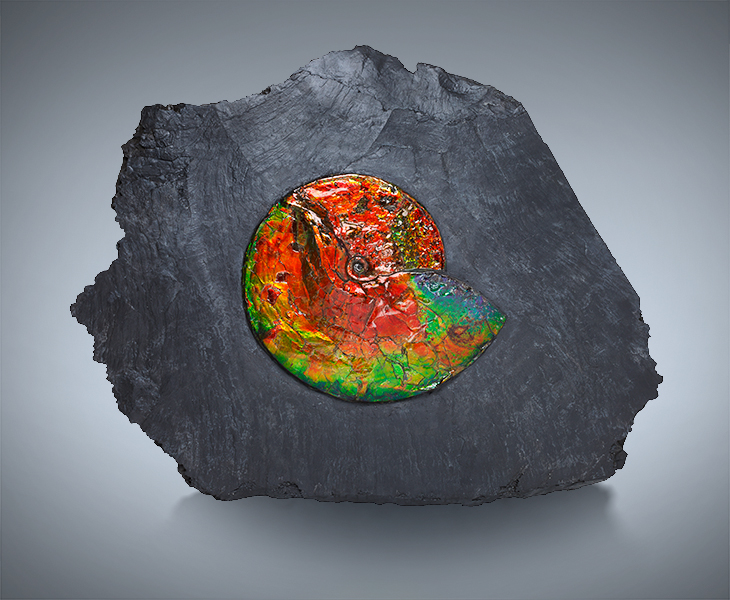 Ammolite is a colorful mineral that is derived from the fossilized shells of the class of cephalopods known as ammonites. The most desirable examples are brilliant in luster and exhibit a full spectrum of intensely saturated color. Although often mistaken for opal, ammolite has a base of aragonite, which is the same foundational element of nacre, commonly known as mother of pearl. While ammolite is known for its richer tones and dazzling pearlescent shine, it is fundamentally similar to nacreous pearl bivalves such as pearl oysters, and freshwater pearl mussels. Ammolite derives its color not from the absorption of light but from the interference of light upon layers of aragonite. Essentially, its color is a product of the density of its platelets. Thinner layers typically give off a blue or violet coloration, while thicker layers produce reds and greens.

Ammonites were abundant during the Cretaceous and Jurassic periods (approximately 200-65 million years ago) and can be found in various deposits worldwide, but ammolites are specific to Alberta, Canada and are dated at approximately 70-76 million years old. It was during this time that North America was dissected by a group of intercepting, shallow inland seas. Ammolites formed in the sea known as the Western Interior Seaway which was lined in a bed of elementally rich, bentonitic clay. When the ammonites died, they sank to the bottom and became embedded in the mineral-rich clay. Eventually, a mass extinction killed off the entire species and intense environmental changes dried out the seaway, dehydrating the seabed. Over time, the clay hardened to become shale, and the aragonite within the shells, aided by the clay, mineralized into pearlescent layers of ammolite. For this reason, ammolite is sometimes affectionately referred to as “great-great grandmother of pearl.” Thanks to its capacity for color, Feng Shui practitioners have embraced ammolite as a stone of prosperity, believing that its substantial time in the depths of the earth imbued it with powerful, lucky energy. Most ammolite is found broken due to natural pressure. Broken pieces are typically fashioned into jewelry while whole specimens are prized for their striking impact by metaphysical believers and specimen collectors alike.

This ammolite specimen was recovered from the Bear’s Paw Formation of Alberta, Canada, the only viable ammolite resource in the world. It is an incredible example of a large, undamaged, specimen that has survived millions of years of geologic pressure wholly intact. This example is well-defined, exhibiting its signature spiral shape. It has been recovered still embedded within its shale matrix (host rock) which serves as an excellent backdrop for the radiant colors of fiery orange, vivid yellow, vibrant green, and hints of blue and indigo. As is routine for ammolite specimens, this piece has been coated in a thin protective lacquer to ensure that its beauty remains everlasting. All of these characteristics make this specimen is an exceptional example of its kind, a geological treasure, and a work of natural art.