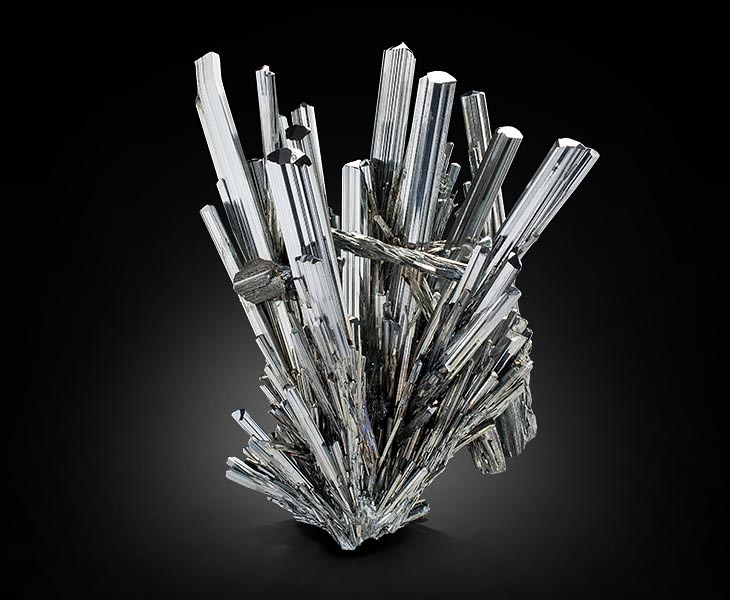 Stibnite is primarily composed of antimony which has been utilized for over 3,000 years as a component of medicine, and as a treatment against “evil spirits.” The majority of antimony is ore-grade and is utilized industrially in metal-casting, and as a flame-retardant additive in various products such as plastics, textiles, rubber and adhesives. When used without the additive of chlorine, it takes quite the opposite role as an incendiary component in munitions.

As a collector’s mineral, stibnite has long had a cult following for its cool, sleek, gunmetal coloration, high capacity for luster, and its potential for extremely aesthetic, sculptural clustering. It was long believed that the finest stibnite had all been found by the early 1900s from the Ichinokawa mine in Japan, but an incredible discovery nearly a century later rivaled the Japanese examples in quality, and thoroughly eclipsed the iconic relics in size, proving themselves to be the new standard. Although Japanese material is still admired for its unique bluish patina and is revered as an old-world classic, Chinese stibnite from the Wuning (also, “Wuling”) mine, discovered in 2005, is considered a modern classic and the best known to date.

The Wuning deposit was exceptionally large with a total of approximately 5,000 specimens. The entire lot was purchased directly from the mine owners through the partnership of Andrew Pagliero, Markus Walter, and Daniel Trinchillo of Fine Minerals International. It took weeks of negotiations and then two months of meticulous packing before the material could even leave China. Once delivered, the exhaustive process of sorting, professionally cleaning, and delineating quality took place. Ultimately, approximately 100 pieces of varying sizes and compositions revealed themselves to be the ultimate examples of not just the lot, but the entire species. Many of the amazing examples from this recent discovery now grace the finest private collections and museum mineral halls around the world. Notably, incredible Wuning stibnites are on display at both the Harvard Mineral Museum and the American Museum of Natural History.

This specimen has several attractive stibnite crystals that radiate from a central base point in an attractive, v-shaped formation. It is dense with both slender and thick crystals that shoot out in rays of varying heights. The individual crystals exhibit faces that look like a network of symmetrical, mirrored panels. They are extremely lustrous and the paneled faces of this specimen reflect a brilliant sheen. Often, the precise symmetry and impeccable shine of stibnite is mistaken for machine-made facets, but assuredly, their precise symmetry and gleaming faces are natural.

Interestingly, this specimen also has two crystals at a horizontal orientation. One allows for complete, face-on view of its B-axis which is a more matte than its gleaming counterparts. The second lies nearly perpendicular to the high-luster crystals. It is comprised of several smaller crystals that have formed in a twisting structure, similar in shape to a screw. These horizontal crystals allow for a unique appearance that adds texture and visual interest to the piece. It is a fine specimen at an ideal collector’s size, one that is compact and easily displayed, yet also impactful. This is a wonderful example from a legendary find that redefined stibnite for collectors worldwide.